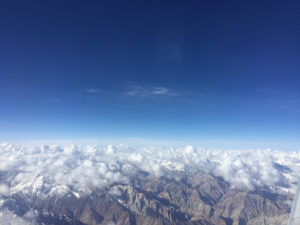 I ask myself whether it was the long drive over rugged Himalayan terrain that added to the mystery of this remote place or whether the ancient and austere impression was enough in itself to strike me with its pin-drop silence.

Scurrying monks occasionally darted across a large cobblestone courtyard adorned with ancient wooden pillars. Ornately painted doors draped with heavy tapestries dawning colorful images of the Buddha invited entry into the cavernous temple. I remained in the courtyard for a long while taking in the overwhelming peacefulness before tackling the steep and well-worn steps up to the main temple. I felt like I was entering into a cave, but the great Buddha statue staring down at me with deep compassion and rows of cushions lined up on wooden pews were rustic, yet distinctly man-made. But, made of men of another time, another world. A world where survival from the glacial temperatures and congregating in the name of silence, discipline and the pursuit of Buddha-consciousness were the raison d’etre. Not a world of men, for men.

As we know, first impressions can sometimes be deceiving. Not that the half nibbled biscuits and empty teacups stashed behind the pews acted as reminders of the fact that, aspire as we might, we are only human. Fallen and dusty statues and crookedly hung tapestries increased the feeling of disrepair and disregard that crept into the cobwebs of my awareness as I walked up the center aisle toward the great Buddha statue in the center.

Warm slanted eyes and a soft smile evoking the feeling of infinite warmth and compassion erased any impressions from moments before. This being a sunny and relatively warm June visit I contemplated what it must be like to be sitting there in those pews, in silent meditation, when outside, not a star could sneak a twinkle onto the abundant snow. A feeling of brotherhood, an ancient community sitting in contemplation of the Great Buddha and his teachings warmed me from the inside waking up my lifelong longing for monastic retreat. My heart pulled. I thought, just for a moment, I might tell my friends to head back to camp and leave me to my destiny. 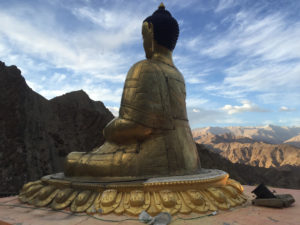 My knees began to tell me I’d been sitting for longer than planned. I eased myself up on aching and half asleep legs and limped down those great steps into the late afternoon sun. An ancient and very large Buddha beckoned to me from a distant hilltop. I set out on waking up legs to scale the hill, drawn to the Buddha and an idea of the view that might await. Cottony clouds delicately brushed across the sky by the light breeze were the only thing between me and the deep blue Himalayan  beyond.

The Great Golden Buddha stared down at me with its eternally peaceful look. Down below, the next generation of monks played cricket in a small field surrounded by trees. To the left, the monastery living quarters sprawled and hugged the side of the stark mountain. Great Buddha. Great Sky. Great Mountains in every direction. Nothing but perfect silence, a romantic dream of monkhood as I eased my way down the crooked steps to the snack bar selling the omnipresent Ladakhi snack, Maggi noodles.

Looking forward to hearing from you! 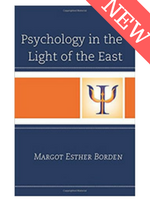 Click here to order your copy of “Psychology in the Light of the East”. 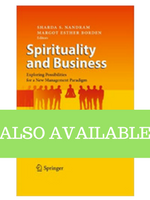 Click here to order your copy of “Spirituality and Business”.

Sign up to get a free ebook about self-love